Since November 2018, the Grade 12 Journalism class has been producing The Breezeway, a student-led publication which is distributed to students, faculty, and staff every 4-6 weeks.

A common inclusion in the Breezeway are spotlight stories on specific faculty members. These features are often born from a connection that the teacher has fostered with a student throughout their time at Southridge. Editors will almost always choose a teacher that they believe the student body would love to know more about.

The most recent issue includes a story about class of '01 alumnus, Darren Jones, who also happens to be the Vice-Principal of Student Life in the Senior School. The article tells the story of how Jones left Southridge as an alumnus and returned 13 years later as a teacher in a story titled "Passion over Paycheque." 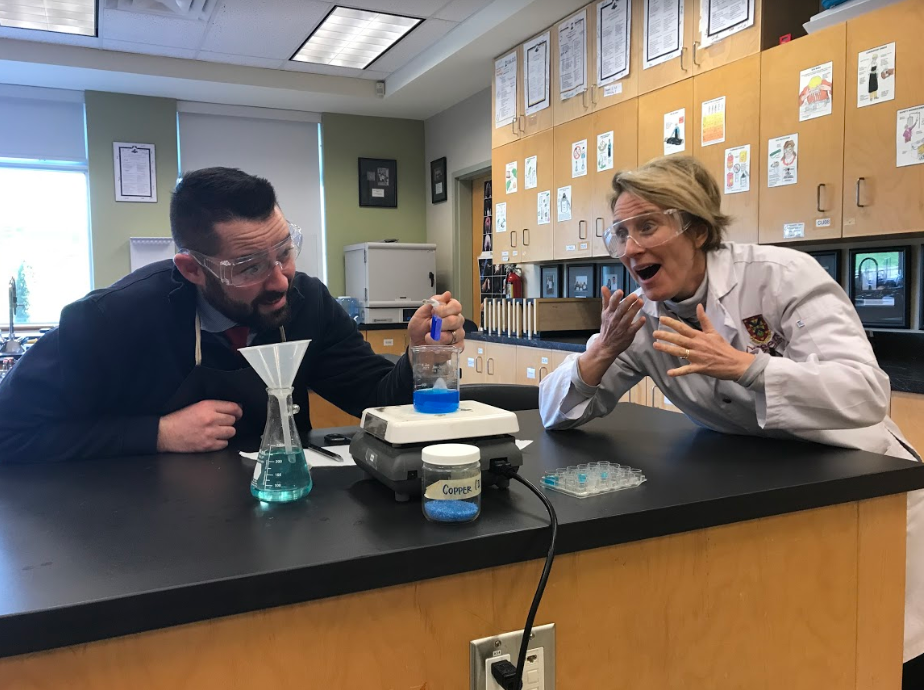 Passion Over Paycheque
By Avery Martin

Most Grade 12's at Southridge can't wait to leave, but Mr. Jones couldn't wait to come back. Mr. Jones became a part of the Southridge community in his Grade 11 year when his father became the Head of the Senior School. Coming from the public school system, the new experience was shocking. Not only was there an abundance of new opportunities that ranged from travelling across the world to exploring the wilderness of British Columbia, but he noticed that his teachers really cared about his success. They were not just there because it was their job, but because they were passionate about what they did, and wanted to share their passion with students.

One of his favourite subjects while at Southridge was chemistry. Like all Grade 11 students currently taking chemistry, Mr. Jones participate in the national crystal growing contest. Hours of work went into the project, guided by the mentorship of Ms. McCaw who was excited to see students who enjoyed applying their knowledge of science.

Eventually, Mr. Jones and his partner, Tamlin Reed, were crowned national champions. Although Ms. McCaw credits the success to their hard work, Mr. Jones was quick to declare "not only did she make me a national crystal growing champion, but also someone who is passionate about science." Although he was passionate about science, his end goal was to go into business at the University of Calgary, so that someday, "he could park his Porsche 911 next to his Mercedes G-Wagon."

While pursuing his degree in business at the University of Calgary, Mr. Jones really struggled with the teaching. It was as if he had gone back to the times before Southridge, the teachers weren't there for the students. During his first year, he took a statistics course that proved to be his turning point. Although he could do the course, it was very difficult, and whenever he went for help, his professor "made him feel dumber each time." This very course taught him that doing what you love is worth much more than a massive paycheque.

Mr. Jones dropped out of the business program and pursued a degree in political science at the University of Calgary and then spring-boarding his undergraduate degree to acceptance at Columbia. Mr. Jones spent one year getting a Masters Degree in Educational Leadership and Organization which led him to eventually getting his first job at the Vancouver School, Crofton House. When Mr. Jones worked at Crofton, although a great school, he was "constantly looking for openings at Southridge." When he had the chance, he pounced, and since, has quickly become the Vice Principal of Student Life! Not only does Mr. Jones currently work here, but his son Myles attends the Junior School, which Mr. Jones finds, "amazing and hopes that his other son will have the opportunity as well!"

As students, we should all follow Mr. Jones by example. He tried what he wanted to do, but also understood that you must love what you do when he decided to become a teacher. Although fancy cars are an amazing luxury, Mr. Jones drives a "Ford Focus and is happier than ever!"