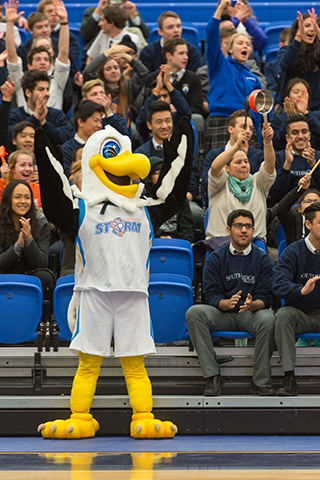 In October 2016, we unveiled our first official school mascot – a splendid creature named Sal who is half orca and half eagle. What many people may not know, however, is that Sal’s journey to Southridge dates to 2014, and is the result of a completely student-led initiative.

The possibility of a Southridge School mascot was proposed by an alumnus, Max Stow, in 2014 when he was in Grade 12. Max introduced the concept of a mascot, presented the idea to the Board of Stewards and conducted some initial research into possible designs and costs. However, as Max was busy completing his graduating year, his work on the project was put on hold. Following Max’s initial efforts, Megan Galbraith and Coleman Alfaro (2015-2016 Senior School Head Girl and Head Boy), picked up where Max left off. Megan and Coleman kept the project alive by continuing to develop and refine the concept.

When Coleman’s family unexpectedly moved away, Samir Saincher took his place as Head Boy. Together, Megan and Samir drove the project forward, meeting with members of the Southridge administrative team to present the ideas and research that had been completed.  In the spring of 2016, the mascot initiative was approved by the School and it was determined that funds raised through the 2016 Southridge Country Fair would be allocated to the project.

Some may assume that this is where the student involvement ended. But not at Southridge! True to our school’s value of welcoming student voice and participation in school-wide initiatives, our students continued to provide input and leadership in bringing their mascot to life.

In May 2016, a contest was held and students from the Junior and Senior School were invited to submit design ideas for their future mascot. Once designs were collected, the entire student body was invited to vote on the one they liked best. The winning design was a creative fusion of an eagle and an orca, imagined by a group of Grade 5 (now Grade 6) students – Elizabeth Lawson, Bonnie Zhai, Camille Hare, Asya Zenin-Segrc, and Maya Dhami.

The girls conceptualized their design with three priorities in mind:

After the winning concept was selected, Samir and Megan worked closely with Ms. Labbé, Director of Communications and Marketing, to refine and finalize the design. Through summer 2016, Ms. Labbé coordinated the production of the mascot with the design firm in Toronto that Samir and Megan had proposed when pitching their plans.

Throughout the entire project, everyone involved was mindful that the mascot would not only appear at athletic events, but also at school and spirit events; therefore, in the production phase of designing the mascot, we ensured that two costumes were created: a full school uniform for school assemblies, and a Storm uniform for athletic events.

Once the design and costumes were finalized, everything was sent to the Board of Stewards for final review and approval.

Lastly, our new mascot needed a name! Once again, our students were invited to submit ideas, and from those ideas, one special name was selected: Sal – a deserving combination of “Southridge” and “Alan Brown”, our founding headmaster.

On October 25th, 2016, at our first full school assembly of the 2016-17 school year, Sal was introduced to our students, faculty, staff and parents, and was welcomed with cheers, smiles and open arms by our entire community. Sal even joined our presenters on stage and participated in our school song!

Sal has brought joy and spirit to our assemblies, school events and athletic competitions. This student-led initiative is yet another tangible example of the ways that Southridge empowers our students to make a difference, leave legacies, and directly participate in upholding our connected community. 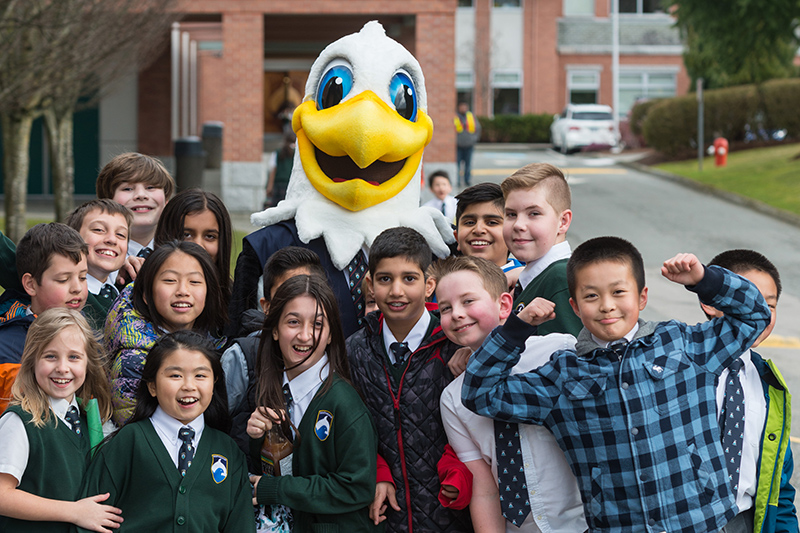 One of the most common questions asked whenever Sal makes an appearance is:
“Who is wearing that suit?” 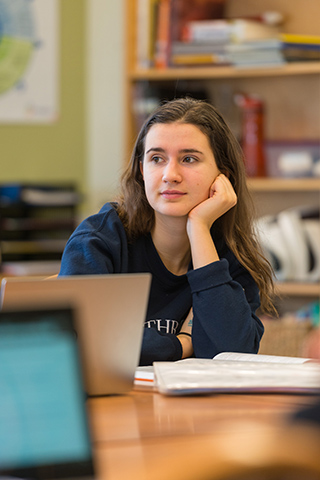 Meet Sophie Wirch. Sophie is a Grade 12 student, and from the moment she heard the School was looking for a student to wear the mascot costume, she knew she wanted the position.

“I originally wanted a Spirit Captain position this year, but I didn’t get selected. I was a little disappointed, but I didn’t let that discourage me – I knew another leadership opportunity would come up that would allow me to participate in spreading school spirit. When they announced at the Senior School assembly that they were looking for candidates to wear the mascot outfit, I knew this was the job for me!”

It takes a special person to take on the role of mascot. Not only does one need to be tall enough (at least 5’10”, to be specific), but individuals who wear our mascot costume also need to be high-energy, strong and confident.

Sophie fit the bill. A dedicated dancer, Sophie spends most of her time outside of school at the dance studio. She is bursting with school spirit and enjoys bringing smiles to the faces of her peers and others in the Southridge community.

Sophie will graduate this June, leaving the role of Sal open for another enthusiastic student for the 2017-18 school year!