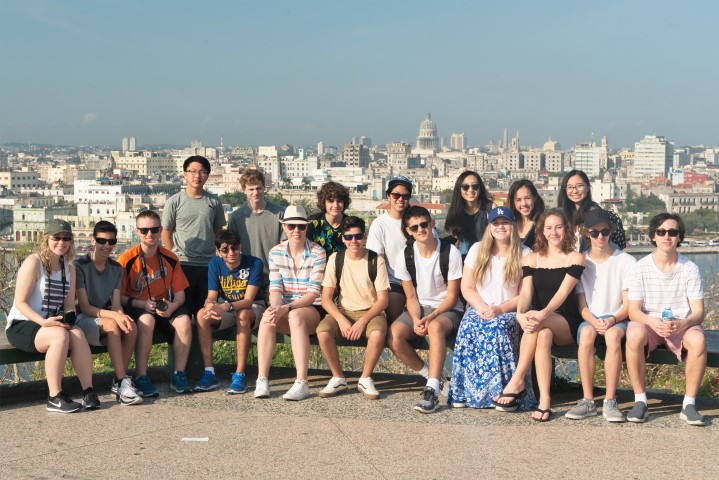 I have had the opportunity to go on many international trips with Southridge. I have been to London and Paris, throughout Italy, even through the Amazon rainforest in Ecuador. Despite having experienced so many countries and cultures, Cuba offered something that felt different in ways that I can't quite describe. Besides the obvious things like the temperature sitting at a scorching 30 degrees, there was something about the people and the environment that felt very different from our own. It was especially apparent when listening to music performed live. The one performance most memorable for me was our first, at an arts middle school in Havana. Our own performance went well despite a few glitches with our sound system and the Cuban power supply. Ms. Parker likes to say that in Cuba, all questions can be answered with these three simple answers: "Ask the guide", "I don't know", and "Its Cuba!"

What really stood out to me, however, was when the children from this school started performing for us. Music, for them, isn't just something to be played, it is something they felt and is a key part of both their culture and themselves. I've been to the VSO's symphony a few times and I have always been blown away by the grace and eloquence of their playing. Even the best in Western culture, in many ways, fails to encapsulate the energy the same way the Cuban children created so effortlessly. They performed several pieces for us and instead of reciting off of sheet music, they changed each piece to make their songs unique. This included a very exuberant rendition of Bruno Mars's "Treasure", much to our delight. Many times the students weren't looking at their music; they knew what to play and how to play it. They felt what they should play. Seeing a mass of about 50 students swaying back and forth as though they weren't sitting in chairs but rather dancing with their music as they were performing was truly incredible.

Overall, Cuba is a beautiful and welcoming place that can easily be enjoyed and visited, made even better when we were able to perform and experience what Cuba had to offer in such a unique way with a marvelous group of people. Had I the chance go back in time to change a single thing about the Cuba Jazz trip, the only thing I would change would be to double the SPF on my sunscreen.